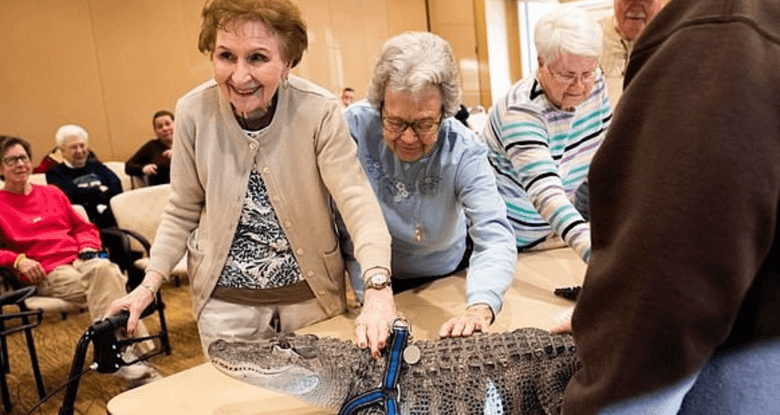 I didn’t read on.  I only hoped not to meet the alligator on a plane someday.

Fortunately, Wendy, our Vice President of Marketing and Communications, read the rest of the article. It turns out that Wallygator visits schools and senior living facilities, among other educational venues. And one of the places he’s visited is SpiriTrust Lutheran in Pennsylvania (see photo above).

It reminded me of the extraordinary efforts Lutheran social ministry organizations make to care for people and ensure they live a full and abundant life.  It reminded me of the alpaca that visited Diakon residents and staff during the earliest days of the pandemic and the staff and certified courthouse dog from Lutheran Community Services Northwest that spend time with victims of sexual assault and so many more stories that I could share.

It reflects who we are and what’s important to us.  And it makes a meaningful difference in the lives of one in 50 people living in America. 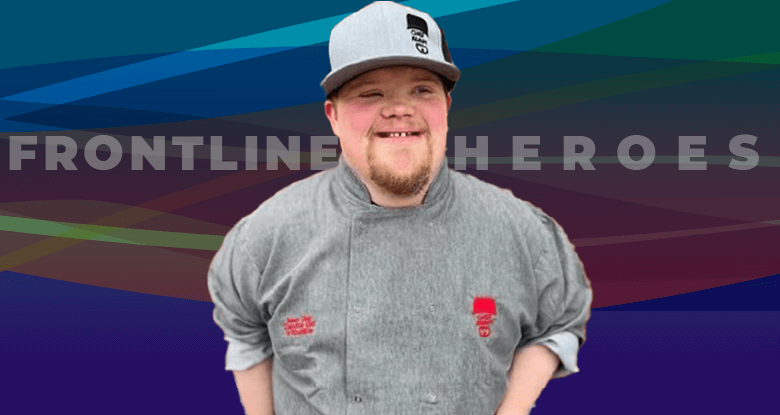 Since Adam Libby was a little boy, he’s been an entertainer. Back then, he put on plays in his yard—confidently assimilating all the characters—and people in his small town of Lincoln, Maine, would come to see him.

“He’s a comedian and a storyteller. He doesn’t shy away from the limelight at all,” laughs Teresa Hess, a community living coordinator at the Mosaic service Living Innovations. “Sometimes when he’s talking with you, he imitates a character in a movie he’s recently watched, and he does a really good job.”

In fact, according to his twin sister, Emily McCormick-Libby, “Adam has always loved entertaining, and he’s always dreamt of becoming an actor.”

Emily added he loves to cook, too, and has done so almost his entire life.

Adam, 30, was born with Down syndrome. Mosaic is passionate about helping people like Adam lead meaningful, healthy lives on their own terms. With more than 100 years of experience of providing care, the Nebraska-based organization supports people and communities in more than a dozen states, from Arizona to Adam’s home state of Maine.

To combine all of Adam’s attributes, his Living Innovations support team came up with the idea of his recording and posting “how-to” cooking videos on the social media platform TikTok. “I thought this would be a great way for him to reach people, show off his personality and focus on his conversation skills,” added Emily. “My wife, who’s a professional videographer, and I started with his first post on how to cook burritos.” That was April 16, 2021.

With his older sister, Brianne, assisting as well, they continued by trying to post at least one video each week. Adam gradually gained 1,000 followers and celebrated the milestone with a video of him making cupcakes. That was July 30.

But it was a short time after, on August 6, when Adam demonstrated making pizza in a woodfired pizza oven, he went viral. We’re talking worldwide viral. That video garnered almost 12.4 million views and shot up the number of his followers to 612,000 with 3.4 million likes on his videos.

In another segment, where he’s exuberantly shouting out what has become his popular catchphrase, “holy crow, man!”, he made homemade french fries that could best any short order cook’s. That video has captured 924,000 views to date.

“He just loves what he’s doing; he’s just eating it up,” stated Emily. “It’s unbelievable. I can’t get my head around how many people are following him and engaging with him!”

With his jubilant and upliftingpersonality, Adam’s such an inspiration that he’s making videos with some of his biggest fans. In one, he’s encouraging a young boy, also with intellectual disabilities, to cook a meal for his family (albeit a meal made of a quick-service restaurant’s chicken nuggets and fries): “Good job, dude! You’re making your mom proud of you!”

“Chef Tommy is my favorite chef,” said Adam, and he has a few others. At the mention of Chef Gordon Ramsay, his face instantly lit up. “Yeah, I like him too!”

“He hopes Chef Ramsay will see his videos so he can meet him one day,” added Emily. “Chef Ramsay is tagged in many of his posts and comments from his followers.”

Besides the news coverage in his hometown newspaper and on the local CBS affiliate, Adam is being covered by many other social media channels and media outlets overseas. “No one contacted us,” remarked Emily. “We just saw the other stories, including some in England, when we Googled ‘Chef Adam Libby.’

“The thing I love most about my brother is he has this excitement and this joy and happiness, and it’s contagious. It doesn’t surprise us that once the world saw him, they would love him, too.

“I’ve never seen him happier, and he’s become so much more independent. He has his own life now with his own passion and career. It’s all so wonderful.”

Oh, did we mention Adam also has 17,000 followers on Instagram?

Mosaic is a member of Lutheran Services in America, a national network of 300 Lutheran health and human services organizations that lifts up one in 50 people in America each year. 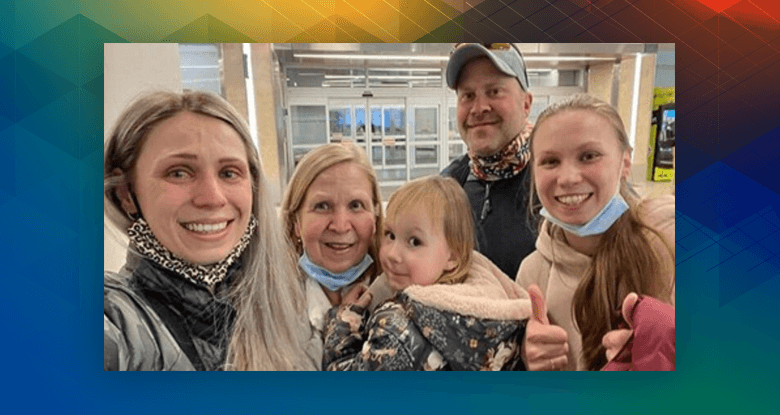 Weeks of fighting in Ukraine have been felt inside and outside the European nation, including 5,000 miles away in rural Bemidji, Minnesota. Olha Finnelly is a nurse at a local Sanford Health clinic whose family lives in Dnipro, about 250 miles southeast of capital Kyiv. The longer the war continued, the more her colleagues worried about her and her family.

“We’d ask, ‘how’s your family?’ One day all of the sudden she wasn’t functioning so well. Very teary-eyed. She was trying to get them out (of Ukraine). When we all heard that, we had to help,” said Kim Schulz, a medical laboratory scientist at Sanford Bemidji.

While Finnelly’s father and brother stayed in Ukraine to support their country, her mother, sister and three-year old niece traveled 22 hours by train, sharing a room that was designed for four with 16 people.

“They didn’t have any luggage with them,” Finnelly said. “The only belongings that they had were backpacks. They brought underpants for the little one. Some snacks, because you are not sure if you are able to get some food.”

Finnelly’s family would take a small bus to the Polish border, eventually making it to Krakow. From there, Finnelly booked them plane tickets to Minneapolis. The total expense for their travel was $3,000, all paid for by Finnelly’s co-workers who raised the money.

“In our Ukrainian language, we have this saying. ‘Tell me who is your friend, and I can tell you who you are.’ So I’m just so happy with my colleagues. (The) Sanford family in Bemidji … we are really like real family over here,” said Finnelly.

Sanford Health is the parent organization of the Evangelical Lutheran Good Samaritan Society, which is a member of Lutheran Services in America, a national network of 300 Lutheran health and human services organizations that lifts up one in 50 people in America each year. This year, The Evangelical Lutheran Good Samaritan Society celebrates 100 years of lifting residents, loved ones, and members of its community.

This is an abridged version of a story that was originally featured in Sanford Health News.