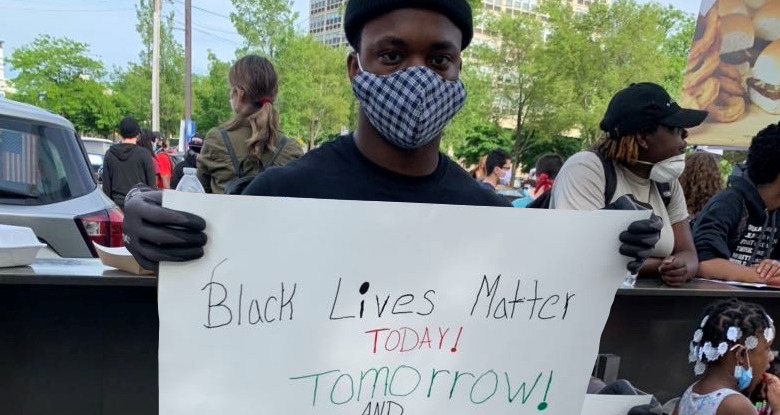 I’m a first generation college student at Valparaiso University, pursuing a nursing degree. My keen interest in pursuing a career in the medical field is fueled by my commitment to providing quality services to marginalized communities. My guiding motivation is to eradicate poverty through empowering poor individuals to become self-sufficient and lobbying the government to end poverty, create positive change and promote justice for all.

Often it seems as if I’m fighting an uphill battle. I’m from an impoverished neighborhood on the South Side of Chicago where I’ve seen firsthand how lack of healthcare, poor education, unstable housing, corruption issues, and unjust authority figures aid in keeping the disadvantaged at a disadvantage. Most recently, the death of George Floyd has sparked an outrage in my community, causing people to protest, riot and loot. As a young black male and an active member of my community, I share their sentiment. Initially, I felt a sense of dejection, but now I feel empowered and motivated to be a better leader and to take a stand.

To understand the psychology of protests fragmenting into riots, we should revisit Martin Luther King Jr.’s 1967 speech entitled, “The Other America.” In the speech, King states, “I think America must see that riots do not develop out of thin air. Certain conditions continue to exist in our society which must be condemned as vigorously as we condemn riots. But in the final analysis, a riot is the language of the unheard.”

My community is unheard. People aren’t rioting solely because of George Floyd’s death, but because of the many other injustices that people of color endure. The acts of police brutality are happening in conjunction with the pandemic. People of color are dying from the virus at a higher rate than anyone else, largely due to the lack of healthcare. People of color also make up the majority of essential workers, yet are losing their jobs at a faster rate. Imagine constantly working more, but achieving less.

I had the chance to interact with various members from my community during a protest last weekend. A few elderly members of a Baptist church expressed their concerns to me about black youth and their endangered social position. They spoke about an overall desperate need for change and how they are willing to sacrifice their lives for future generations. A pastor from a local church discussed the effect systemic racism has on the black collective, making it much more difficult for individuals in impoverished communities to have the opportunity to succeed. One female protestor no older than 16, told us the heart wrenching story of losing her grandmother to the virus and two of her brothers to police brutality. Reliving that moment while writing this is emotionally triggering and reiterates the fact that something needs to be done!

I feel there is a better way to initiate change other than rioting, however, the “why” behind a riot is important. The Boston Harbor riots in 1773 started the fight that resulted in the formation of the United States. The Haymarket Riot in 1886 resulted in significant developments in the organized labor movement and people ultimately being granted 8-hour workdays. The King Assassination riots in 1968 led Congress to pass the Fair Housing Act to prevent racial discrimination in housing. The common thread in each of those cases is minority groups manifesting a desperate plea to be heard.

As a Nursing major, I tend to look at rioting as the symptom of a deeper disease. In order to treat the symptom, we have to treat the disease, which, in this case is systemic racism along with a history of black oppression. Rev. Dr. Otis Moss III stated, “Racism is a virus. It infects the spirit. It infects the soul.” This virus/disease has infected the soul of this country. It has rotted the basis of everyday life in the United States and managed to persist over 50 years after Dr. King’s “The Other America ” speech and his assassination.

Understanding the historical conceptualization of rioting is not at all saying it is civil or justified. Yet, trying to address the symptoms of a virus/disease without addressing its root causes is bad medicine. If we choose to ignore the underlying problem, we can never fully heal. 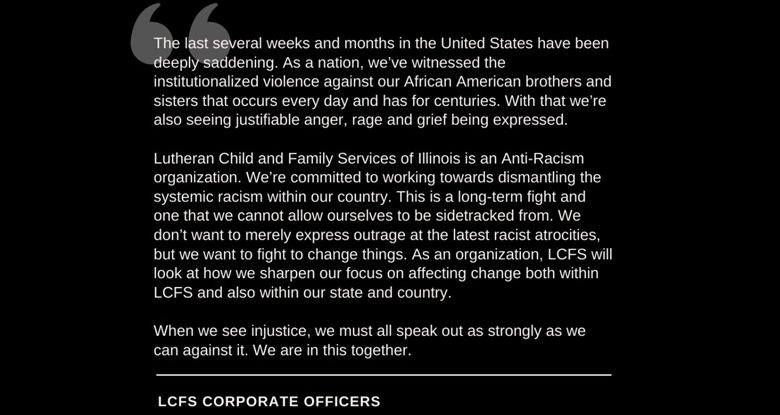 Today’s Front Line Hero is Lutheran Child and Family Services of Illinois, which is speaking out against structural racism, and is dedicated to dismantling inequitable systems in society.

LCFS of Illinois improves the wellbeing of people across Illinois through their children, youth, and families services. They offer programs such as foster care, adoption, and counseling, and their mission is to nurture children and strengthen families in need.

As part of the LCFS Illinois mission and vision, the organization voices a commitment to be color cognizant, “believing in the importance of racial and ethnic differences because of their profound impact on individuals, groups, communities and society, as well as acknowledging the accompanying widespread racism and discrimination in our broader society.” LCFS of Illinois has made a public profession to be a place where explicit, productive conversations about race are welcomed, and advocates for racial justice.

After the recent death of George Floyd at the hands of Minneapolis police and the protests that followed, LCFS of Illinois released a statement about social justice and racial inequity that aligns with their long-standing commitment to being an Anti-Racism organization. LCFS Illinois recognizes the justifiable anger and grief that followed the most recent acts of violence against African Americans in the United States, though this pattern of violence has been present for centuries. In their statement, LCFS of Illinois reaffirmed their vow to work toward dismantling systemic racism in the United States, and professed their intention to affect change within the organization, in the state of Illinois, and around the country.

Thank you to LCFS of Illinois for your leadership and long-standing dedication to racial justice.